Ostrov – A Diverse Offer for the Whole Family

The town of Ostrov is located under the Ore Mountains, near to Karlovy Vary. Perhaps no other town has undergone more historical twists and turns than Ostrov, which is another reason why Ostrov is so unique today. In one location, you will find Baroque, Gothic, and Renaissance monuments along with buildings influenced by the style of socialist realism. Here, lovers of architecture, history, and nature will enjoy a good time, and the entire family can discover it all.

Ostrov Chateau and the Eighth Wonder of the World

The dominant structure of the town of Ostrov is the reconstructed chateau of the same name, whose complex consists of an extensive group of several buildings. The eleven-hectare park with the Summer Palace lays adjacent to the complex on the western side. In the 17th century, the Ostrov Chateau Park was considered the eighth wonder of the world. In its heyday, the park had several fountains, pools, and other entertainment elements. The aristocracy could thus enjoy, for instance, boat rides. The labyrinth and skittles were also popular. There was even an orangery, a menagerie, or cages with exotic birds. Although the original appearance was not preserved primarily to its expensive upkeep, it continues to enthral visitors. One of its sections is an English park. Around the Summer Palace, also known as the Palace of Princesses, there are French-styled gardens. An educational trail leads through the park, known as Chateau Stations. You will learn much about the park’s history from the information boards.

The chateau itself formerly served as the family seat of the Schlicks, and today, the town hall is located here. But that is not all – the inner atrium roofed over with a glass ceiling is a place where historical and modern architecture come together to create a site for cultural and social events. The local museum is also quite attractive, and it is divided into three sections. The exhibition in the Salla Terrena presents the history of mining in the Ore Mountains and shows the everyday life of miners. The exhibition in the Attic entices one with information about the Schlick Family, minting, and Ore Mountain crafts. The section found in the information centre focuses on the work camps in the Jáchymov Region.

Part of the chateau is also the reconstructed Palace of Princes, where today, the Ostrov Municipal Library is found. In the gorgeous Baroque building, you will see rare frescoes, and you can also peek into the historic chronicle. The Orangery is also freely accessible. You do not need a library ticket to enter one of the most beautiful Czech libraries.

If you wish to make your excursion to the historical core of Ostrov more exceptional, download the new app Živé hory to your phone. This app uses expanded reality or 360° video-spheres to help users make long-gone places in the Sudeten landscape to come back to life through several dozens of interactive visualisations. During your trip, you can thus literally examine the fundamental stories from the past of not only Ostrov, but also of the entire Ore Mountains.

The monastery complex in Ostrov, also known as the Holy Precinct, is located on the western edge of the historic centre of Ostrov, and neighbours with the famous chateau park. No fan of Baroque architecture should miss visiting it, since it offers many monumental Baroque buildings dating to the 17th and 18th century on a relatively small surface area. The former Piarist monastery today serves as a building of flats. But the adjacent Church of the Annunciation with the Chapels of St Anne, St Florian, and Our Lady of Einsiedeln can be accessed. Plus, the monastery church houses the permanent exhibition Ecclesiastical Art of the Western Ore Mountains  and also the complementary exhibition entitled The Destroyed Churches of the Karlovy Vary Region. 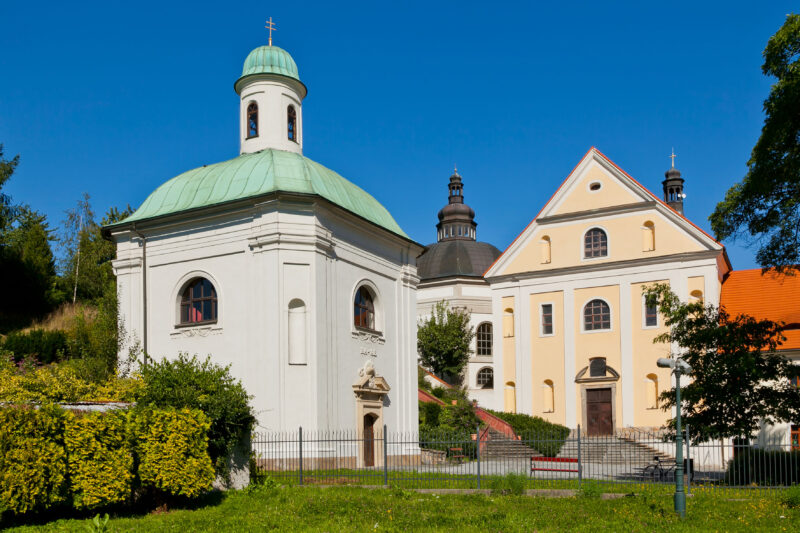 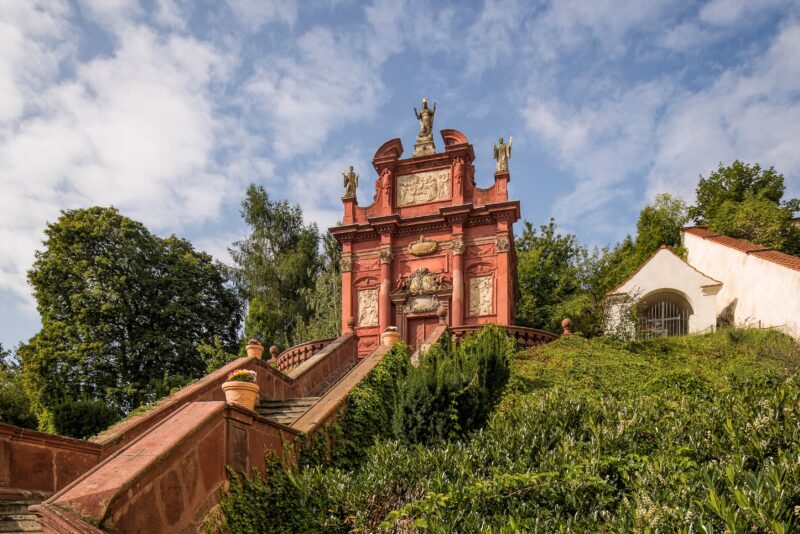 The Ecocentre will particularly be enjoyed by families with children, since it is a small paradise with more than one hundred animal species located in the beautiful environment of the monastery gardens. The centre also has a relaxing resting zone. Here, you will find aquarium fish, small rodents, snakes, spiders, exotic and predator birds, small beasts of prey, sheep, and poultry. In the afternoon hours, you can see the indoor and outdoor runs, and you can also arrange to pet, cuddle, or feed some of the animals while being supervised by the staff. Part of the complex is also a relaxation garden that has a pond and benches, a playground, or an uncommon barefoot path. 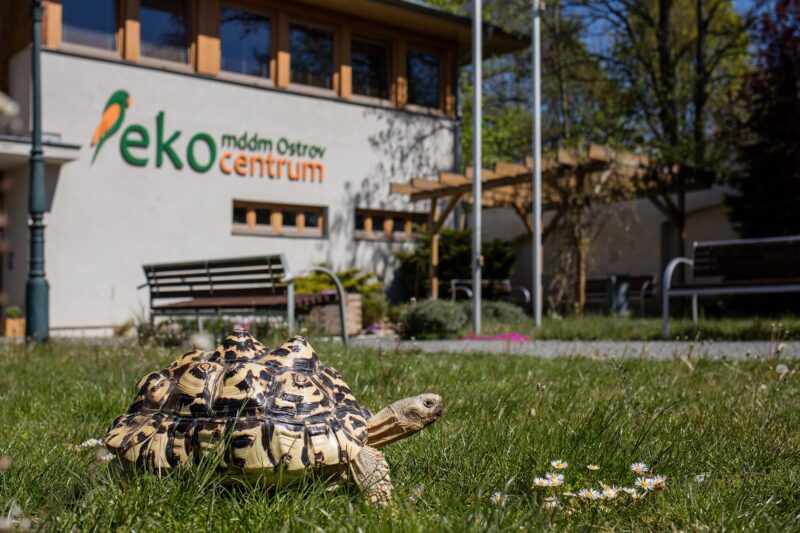 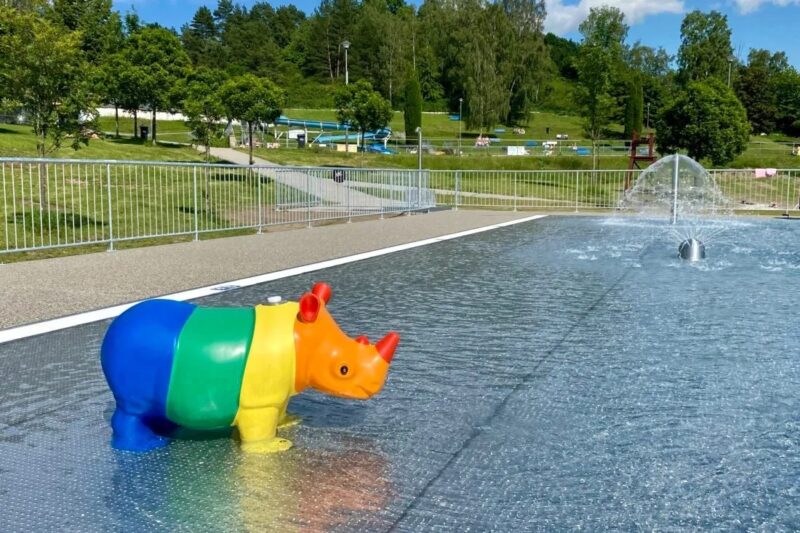 Northwest Bohemia can boast of a product that made the Czech Republic famous around the world – porcelain – and the town of Ostrov also proudly lays claim to the tradition of porcelain production. In the atrium of the chateau and in the Summer Palace, you will even find two valuable exhibitions on Ostrov porcelain that are part of the international project called Porcelain Way (Porcelain Strasse). This leads through more than twenty locations in West Bohemia and Bavaria, illustrating the significant history of porcelain factories that were of global importance in the 19th and 20th centuries. Thus, you can examine not only the exhibit on the production of the porcelain factory in Ostrov, Pfeifer Löwenstein, which was and remains a synonym for high quality, as well as the production of the other porcelain factories. You will also see examples of production from around the world. Now, you can even come and directly see the exclusive porcelain from Ostrov by the “Plus” brand, the manufacture of which was terminated just after World War II and was never restored. In the 1990s, the town of Ostrov began gathering the now-extensive collection of the porcelain so typical of Ostrov, currently consisting of over seven hundred items. The most famous ones can be purchased in the form of replicas .

The Red Tower of Death

Those who love history will enjoy Ostrov. All they need do is to visit the monument with the terrifying name inscribed on the UNESCO World Heritage Site list. The Red Tower of Death, originally a central crushing and screening plant of uranium ore, documents the period of massive uranium mining not only in Jáchymov, but also in other locations around Czechoslovakia, in the 1950s. This national cultural property serves as a symbol of the suffering of  political prisoners who, in the 1950s, were imprisoned under inhumane conditions in the forced labour camps near Jáchymov. The Red Tower of Death, a seven-storey building of red bare bricks with a ground-floor dispatching warehouse and a steel loading ramp, is the last building to be preserved out of the entire complex built in 1950/1951. The Red Tower of Death was part of the Vykmanov II labour camp, established in early 1951. Around three hundred particularly politically inconvenient prisoners used to work there. The Red Tower of Death became one of the most dangerous workplaces in the Jáchymov area, because everyone who worked in the building worked without any protective equipment and clothing, thus getting into direct contact with the radioactive material and inhaling the radioactive dust. Be sure to check the current opening hours of the tower on its website.