Mysterious geological phenomena on the horizon and eight hundred years of history underfoot. The mining region on the border between the Czech Republic and Germany is one of the places that fascinate lovers of culture, history and wildlife thanks to its dense network of preserved mining monuments and dramatic history linked to important scientific discoveries. It consists of twenty-two components, seventeen of which are located on the Saxon and five on the Czech side of the mountain range. Walk through the places where medieval miners left their indelible imprint, as did the explorers of the atomic age, and be enchanted by the genius of the Erzgebirge mining landscape.

Without Jáchymov, the world would look very different. It was in this small town on the border with Germany that the history of mining and the spa industry, but also of the monetary system of Europe, was written. In addition to a number of inventions of global significance, the first mining apprenticeship was founded here in 1716, and the mining landscape of Jáchymov was an unrivalled model and inspiration. With the ‘silver rush’ of the 16th century, a spiritual and cultural life developed here, the imprint of which can still be seen in the displays of the Latin School.

Jáchymov embarks on a several-day trip. The history of silver mining, coinage (including the tolar during the reign of the noble family of Šlik, which inspired the current dollar) and later the radon baths can be found in the Royal Mint Museum. You can continue with a tour of the 260-metre-long Grotto No. 1, which houses a mining museum with an exhibition of period mining equipment and demonstrations of mining techniques. The mining sights are complemented by the Astoria Adventure Adit with projections and interesting information about the history of the Svornost mine or the healing radon water.

In addition to silver and other ores, Jáchymov is famous for uranium mining. It was the local pitchblende from which Marie Curie-Skłodowska and her husband isolated the elements radium and polonium. After the discovery of their healing effects, the first radon baths in history were built here. The Svornost mine, the oldest working mine in Europe, is still used to supply radon water to the spa. After the Second World War, the situation was reversed and the communist regime built several camps in the area, where political prisoners mined uranium under inhumane conditions. Thus, instead of saving life, radioactive elements contributed to its destruction. The history of Jáchymov is rich and does not turn a blind eye to any of its aspects. That alone makes it worth a visit.

A landscape that has been defined by the mining of tin, iron and other ores since the 16th century. The three ore fields are united into one area, dominated by a number of urban and landscape monuments, led by the historic centre of Horní Blatná, where the Renaissance church from 1594 or the richly decorated houses from the 18th century are still preserved. Blatenský vrch (Blatenský Hill) with numerous mining remains, a lookout tower and the jagged natural monument of Vlčí jámy (Wolf Pits) towers just outside the town. A nature trail leads through the area directly from the town of Horní Blatná.

In the nearby Bludná mine you will find many echoes of tin mining, the most significant of which is the post-mining site of the Zuzana mine or the Red Pit sinkhole with a 170-metre deep pit. Bludná also leads to the Blatná moat, which supplied water to the Ore Mountain mines. It is a unique technical cultural monument. A 12-kilometre-long moat is flanked by a nature trail with 23 stops. An interesting phenomenon are also the seips, at first sight hundreds of heather-covered hills scattered across the landscape west of Boží Dar, which thanks to them acquires a magical atmosphere inviting to dreamy walks.

The highlight of a visit to this area is the descent into the underground. The well-preserved Mauritius Mine with its 400-metre-long tour route will take you past places with remains of hand stamping with handcuffs and threshing machines, as well as places in the rock cracked by the heat caused by the fire-stamping technique. Also breathtaking is the Johannes Tunnel, where 500 years of history of the dangerous mining profession will breathe on you during a two-hour tour. There are several tour routes, including the Silver Vein or the labyrinth of interconnected chambers and workings, as well as the opportunity to try out the low crawlway.

The Red Tower of Death

Different from the mining monuments and spa towns is a brick building near Ostrov called the Red Tower of Death, shrouded in a dark and painful history. Uranium ore was mined in its vicinity and exported to the USSR for the Soviet nuclear programme. The mining was carried out by political prisoners who were killed by the animal uranium dust, the hard labour in inhuman conditions, and the cruelty of the guards. Today, there are regular guided tours of the tower and the opportunity to visit the Third Resistance Museum with period clothing and prisoner products. 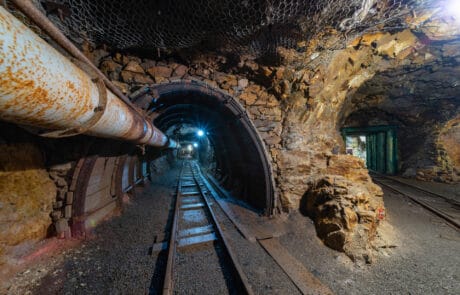 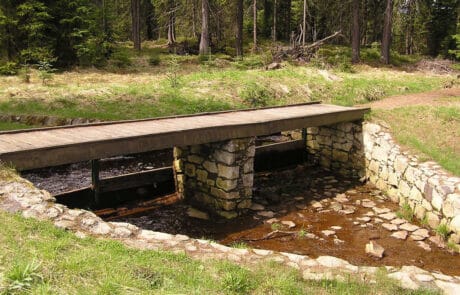 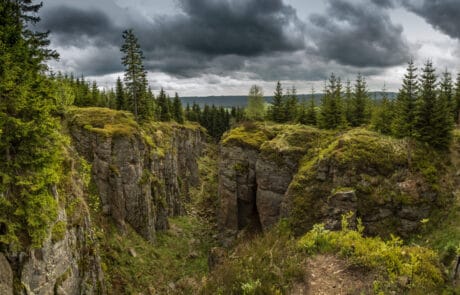 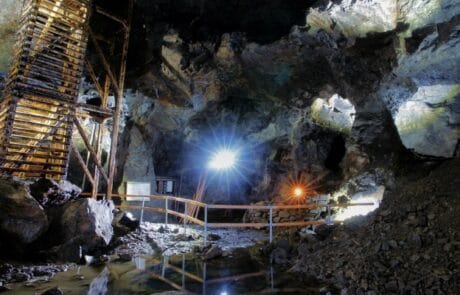 Start moving in the Karlovy Vary Region! Whether you are seeking wild downhill rides over mountainous terrain or ...