At the foot of the Ore Mountains lays a town that to this day carries the marked signs of the 1950s. The architecture of the Socialist Realism Style (also known as sorela) defines the town centre to a great degree, but you will also find the historical area with the park, chateau buildings, and the so-called Holy Precinct. Ostrov always has surprises up its sleeve.

Beyond the limits of the modern era

However, the historical core of the town is made up of much older buildings. The monastery complex known as the Holy Precinct lies on the western edge of the town centre and will enchant the lovers of opulent Baroque architecture. Here, you will find several chapels, the Church of the Annunciation, or the monastery garden.

In the 17th century, the physician from Karlovy Vary, Michael Raphael Schmutzer, dubbed the chateau park in Ostrov the Eighth Wonder of the World. The park winds around both banks of Jáchymov Brook and was originally established in the spirit of the Italian Renaissance gardens. Since then, it has undergone many adjustments that continue to this day. You can discover more about its many appearances from the panels on the educational trail.

However, the chateau park could not exist without a chateau. Today, the courtyard of the Ostrov chateau, offering an exhibit of the chateau’s history, as well as that of porcelain, the information centre, and the exhibition premises of the garden hall are open to the public. The Palace of Princes serves as the municipal library, and the municipal chronicle is stored there.

Echoes of the fifties

Opinions on architecture built in the socialist realism style (also known as traditionalism or post-war modernism abroad) differ. Elsewhere in the world, it is considered a legitimate style, and its buildings are today becoming protected monuments. This is also the case in Ostrov, whose historical core is an urban monument zone, dominated by the majestic Cultural Hall built in the years 1954–55.

The darker side of the 1950s is represented by the Red Tower of Death, which is on the UNESCO World Heritage List. As the name already implies, it is a reminder of the tragic fates of political prisoners who worked in the uranium mines in inhumane conditions. Today, it serves as a place of reverence, and it also gives tours, ideally arranged in advance.

Trips to the surroundings

About ten kilometres from Ostrov is Horní Castle also known as Hauenštejn, with a rich history reaching as far back as the 13th century. Currently, it is being renovated, and you can visit the feasting hall in the Gothic cellar, the chateau chapel, or the Knight’s Hall with the original, carved ceiling. And if you travel from Ostrov to the south, you can cross the covered bridge in Radošov over the Ohře River. It has been standing here since 1364.

Are you interested in more recent history? Travel to the nearby village of Kyselka with its complex of former spa buildings. You will find the Mattoni Museum there, with its unique exhibition on the history of the company. Do not forget to also visit the Skalky skřítků (Elf Cliffs) National Nature Monument and the Bučina Lookout Tower.

The woods are fragrant, and the soundscape is made up of the swooshing of calm waters. These are the nine Borecký fishponds located on the northern edge of Ostrov, surrounded by meadows, pastures, and welcoming forests. This popular spot for pedestrians and cyclists is also popular with ducks, swans, and even the rare crested newt.

For those who are not satisfied by a walk around the fishponds, then there is the large Eco-centre in Ostrov. It is based in the monastery complex and is comprised of a relaxation garden along with three pavilions with a run for game. The centre also organises clubs dedicated to nature.

Did you know that Ostrov has its own film festival? It carries the name of author and scenographer Ota Hofman and is primarily focused on works for children. It has been held in the autumn since 1969. 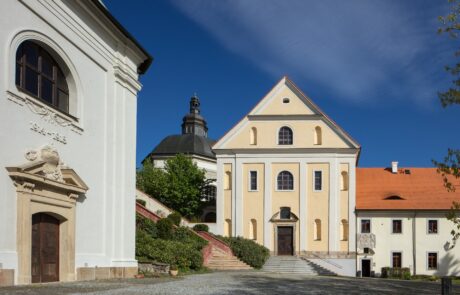 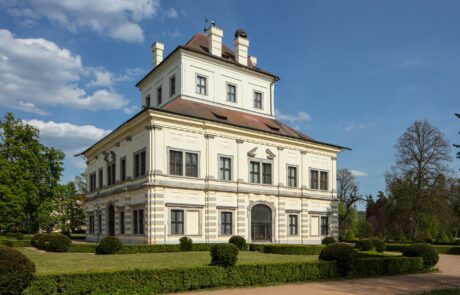